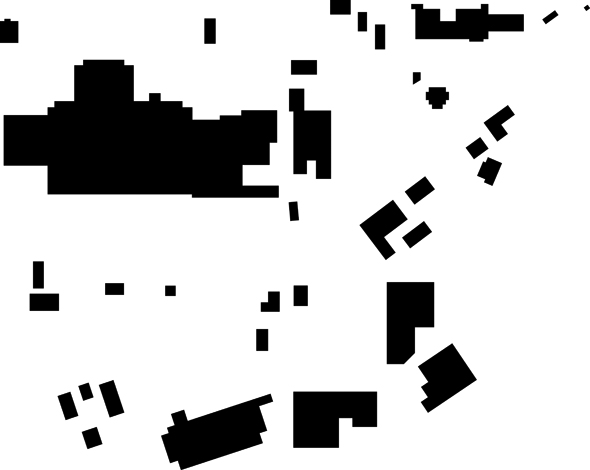 Figure-ground diagramming is an interesting and useful tool for analyzing spatial relationships in urban environments. It also provides a striking comparison of density and land use of older urban development compared to more contemporary suburban development. In older, urban places buildings typically took up the majority of space on a city block so even when diagramming built structure as figure (black) and space without structure (ground) the graphic would essentially depict the street grid. In more contemporary development however, auto-centricism has made for much more spread out buildings divorced from the street edge. Instead of relating to the street and sidewalk (if there even is one), these buildings related to their respective parking lots. Figure-ground diagrams of these sorts of places are often difficult to discern where roads actually go, but are very telling at the amount of open space wasted on the temporary storage of cars.

The figure-ground diagram above is an example of one of these suburban places that lack order and urban spatiality. They vast openness surrounding the buildings makes it hard to tell where roads go or even scale. The variety of building orientation in this case makes it even more difficult to decipher. In the image below, the roads are included, and we can begin to understand more about this space. 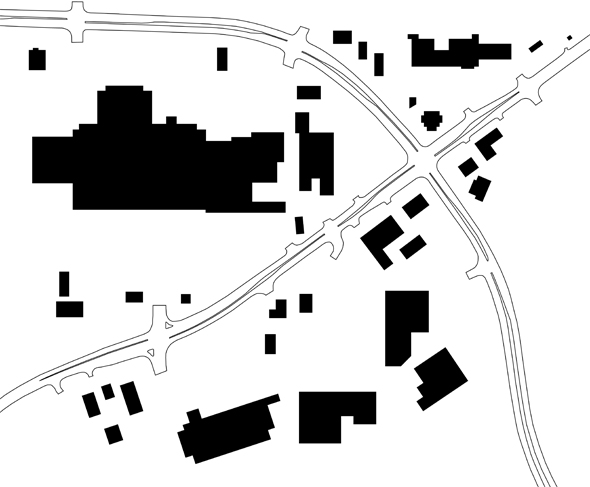 The diagram shown is of the Lindale Mall area in northeast Cedar Rapids, where First Avenue and Collins Road intersect. First Avenue is the road running diagonally from the lower left-hand corner up to the top right. I first decided to explore this area through figure-ground after noticing the actual corner of First Ave and Collins is very undefined. In fact, hardly any of the buildings in the study area relate in orientation or proximity to the street at all.

In the image below I stitched together multiple bird’s eye views from Bing Maps. The predominance of pavement stands in stark contrast with the lush green, tree-laden land to the south. The awkward angles at which big box stores were built, situated far from the street, combined with sloping terrain, makes for a very haphazard, almost disorienting, landscape. Driving along First Avenue, the only thing definite is that you are constantly surrounded by parking lot. Asphalt abuts the street the entire length, with only a few small outparcel structures even nominally close. 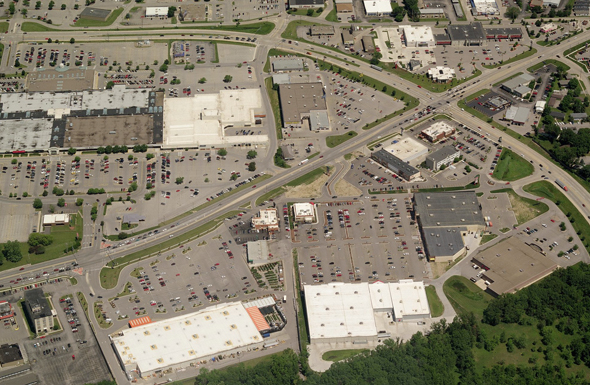 The area began developing in the 1960s, following the construction of Lindale Plaza, later enclosed as the indoor mall it is today. Besides Lindale, most of the larger scale retail developments there today were only built in the last ten years or so, as older properties were redeveloped. These recent redevelopment areas comprise a significant amount of the First Avenue corridor, and every single one disregards site context and has little relationship to the street. How unfortunate since these will ultimately remain for at least the next few decades. 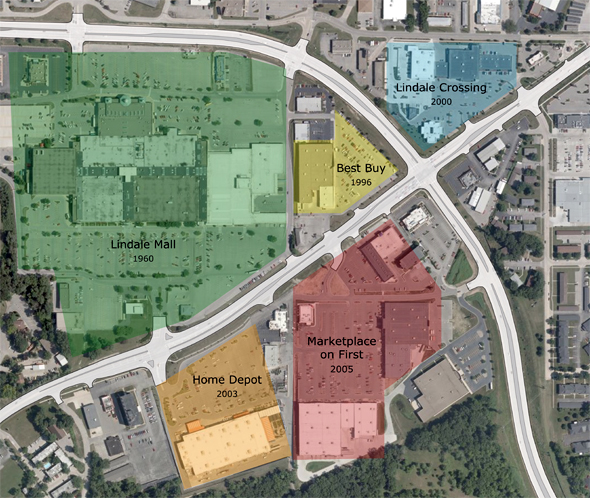 So why is this a problem? The chaotic development pattern makes finding particular businesses – especially while driving – more difficult, and is very inconvenient for pedestrians. Even if the area had a complete sidewalk network, going from place to place would take much longer on foot than if buildings were closer to the road. I also don’t think massive parking lots make for a very attractive street environment.

Now I’m not advocating no parking, but what if the placements of all these buildings were simply switched with their respective parking areas? If buildings were located by the street and parking placed in the rear, it would be more accessible and equitable to those arriving on foot, bike, or bus – while still serving car customers just as well. With buildings all along the street, it would reduce the distance between places, making it easier for people to get to multiple stores and restaurants in the area on foot. In the current setup, it’s likely most people will get back in their cars just to drive over to the next store rather than walking.

Aesthetically, the street would be much more attractive with a well defined edge. This would provide the area a stronger sense of place and urbanity, instead of the anonymous suburban scape that exists now. Distance-wise, the mall and surrounding development is really quite close to a large residential area, just a few blocks down First Avenue, but right now there’s not even a sidewalk from around 40th Street up until the mall, where then, there is only a partial sidewalk along the south side in front of Home Depot. Even so, if a continuous sidewalk existed, psychologically the perceived distance from nearby homes would be quite long due to the spread out configuration of buildings. Built-up density makes walking distances seem shorter, while vast open space – like parking lots – makes distances seem longer.

If newer buildings like Home Depot and Marketplace on First had been built up to the street, this area would already look and feel more dense and closer together. With a more urban scale, nearby residents may find walking or catching the bus (pending improved transit service) to be more convenient than driving the five or six blocks to the mall. Unfortunately the current setup encourages and almost necessitates driving.

I don’t expect this area to ever drastically change, especially since many of these developments are relatively new, but I do hope that other new large and small scale commercial developments will be more respectful of the street and accommodate customers arriving by all different modes equally. Urban design is not only about how the environment looks, but about how it is organized, oriented, scaled and proportioned. Good urban design can have a profound impact on the accessibility, usability, and sustainability of new developments.