This past week I, along with ten or so other classmates, participated in the For a Frugal Approach in Architecture International Symposium and Design Workshop, sponsored by the Bruno Zevi Foundation. The focus was frugality in architecture, specifically for post-disaster emergency housing. The symposium started on Thursday (Jan 21) with a day of lectures from a number of international leaders in the field, including Nina Maritz (Namibia), Jorge Mario Jauregui (Brazil), Giorgio Goffi (taly), Sarah Wigglesworth (UK), Eko Prawoto (Indonesia), and Danny Wick from Auburn’s Rural Studio in Alabama.

It was held at the Citta’ dell’Altra Economia (“City of the Other Economy”), a part of an old slaughterhouse complex converted into exhibition and meeting space “for the promotion of the economy” related to agriculture, trade, and renewable energy, etc. It was a neat conversion but for this event the space was a bit too small (not enough seats) and did not seem to be heated. Logistics of the event was interesting since every speaker had to be followed by a translation between Italian and English. It also started at least half an hour late and presenters tended to go over their allotted time amounts – but punctuality certainly doesn’t seem to be common in Italy. Admittedly the whole day seemed to drag on, but I particularly enjoyed Giorgio Goffi’s work, and Danny Wick’s presentation on the Rural Studio was especially interesting.

On Friday we met at the Faculty of Architecture (department of architecture) at Sapienza University in Rome for the design workshop. American students from Northeastern University and Roger Williams University also participated. We were each paired with an Italian student to design a proposal for an emergency housing unit for the Abruzzo region near L’Aquila in response to the April 2009 earthquake there. We began at 9am and had until 7pm to finish, which ended up being extended to 8. The night before I had familiarized myself with the Abruzzo area and the extent of the disaster. My partner Marcella came with a basic design layout and some thoughts on materials, so we just built off of that. The language barrier was at times challenging (we referred to Google Translate on occasion) but she spoke English pretty well so it wasn’t really a problem.

We decided on a fairly simple L-shape with a half courtyard space in the SW corner. Each adjacent dwelling was set back halfway from the previous to permit ample direct sunlight to the courtyard windows for solar heat gain in the winter. For the east and west walls we decided to use thick stone walls (available from building rubble) to create thermal masses that could absorb solar heat during the day to be redistributed during the cooler night. There were some issues we didn’t get clarified and were not optimal for environmental conditions. My partner told me most of their curriculum is design-based and didn’t really have classes on building tectonics or passive design for environmental controls. It was a nice realization of how much I have actually learned at Iowa State about not only design, but also how buildings go together and how to harmonize them with environmental conditions. 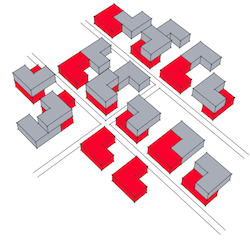 Some of the architects who spoke the day before came for a while and walked around to check on the progress. Nina Maritz talked to us earlier on when we were still clarifying specifics of materials and orientation. Later one Giorgio Goffi stopped by, but only spoke in Italian. He had suggested considering our L-shape as a starting point and how they could be used to create a variety of different sizes and forms. This was not a bad idea, but it made it more difficult to clarify specific decisions regarding solar orientation, tectonics, and of course organization. We attempted to show both ideas – the variation that Goffi suggested, and the more specific possibility of one L. However the new abstract L variety got rid of the original relationship between adjacent units, making several material and orientation decisions less significant. In the end we sort of ran out of time and had a less than stellar presentation – we both agreed it was not good graphically and did not represent our ideas well. But we discussed a lot of interesting strategies during the day, so it was a really good learning experience.

The program wrapped up Saturday morning with visual presentation of the proposals and discussion from the panel of speakers. Unfortunately it was extremely unorganized with slides out of order and starting half hour to an hour later than scheduled. The discussion was interesting and informative, but like many professors and experts, almost everyone had to get the last word in, even if it was simply to agree with and over reiterate someone else’s point. Following the discussion orderves and champagne was served in a small courtyard next to the auditorium, so all was good.

Overall “Frugal Architecture” was exhausting, but a great experience. Getting insight into architectural education in Italy and the different perspectives and approaches the students bring was extremely valuable. It was also a terrific opportunity to challenge my own communication skills and knowledge of architectural and environmental systems.