January 20, 2010 / Brady Dorman / Comments Off on History of Contemporary Rome 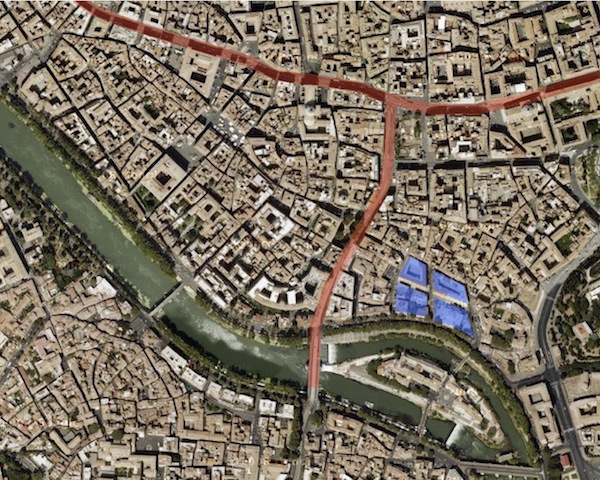 Today we had another intriguing lecture for ARCH 528 as well as a walking tour discussing the contemporary history of Rome in connection with the modern republic of Italy. Rome became the capital of the unified Italy on December 20, 1870, likely chosen for its symbolic history as a center of power and government. At the time Rome was not much larger than the original ancient city and had somewhat of an agrarian economy. Expansion and transformation from a sleepy town to once again major urban center occurred very rapidly. Modernization had to be quick so many existing buildings were taken over for government use and to house various ministries.

The biggest issue was housing to accommodate the extraordinary growth. Rome was a city of employees, not industry, but construction of course boomed. Surrounding landowners – monasteries and aristocrats – were now developers and there was a building fever. New buildings were eclectic with historical references on facades. A typical new building – becoming common across Europe – was four or five stories tall with all commercial space at ground level. Above on the first floor were located larger, luxurious apartments for the wealthy, and the upper floors became shorter and smaller for the lower classes. This is very interesting, seeming to be the beginning of planned large-scale mixed-use buildings. In general the ancient part of the city was and is still mixed with residential and commerce, but it was much more organic and reactionary.

So much of the city of Rome is not of ancient or even medieval times, but of the 19th and even early 20th centuries. To accommodate automobiles, some new arteries were cut through historic areas. Corso Vittorio Emmanuelle II was cut through the dense Field of Mars area (in the thick of ancient Rome). Unlike new straight arteries, this one winds through to minimize destruction and curve around the most important buildings. Otherwise many building facades were cut back. This is still not a particularly wide street by any means, but is certainly an important traffic corridor through the middle of the city. To the east it connects to a new street, Via Nazione which was modeled after radical new radial avenues in Paris that accommodated not only traffic, but various infrastructures as well.

And finally, close to home (studio) in the Jewish Ghetto, major changes also occurred. With striking parallels to the United States’ urban renewal of the 1960s and 70s, whole areas were deemed unfit and demolished to build brand new. A large part of the ghetto, which had been extraordinarily dense was removed and laid over with a modern grid – including the new synagog. The whole area replaces resulted in only four blocks so the juxtaposition against the remaining ancient urban fabric is quite unusual. (See blue blocks on map above.) At one place you can stand in between the ancient ruins of the Portico d’Ottavia, tiny medieval buildings, and large scale block-sized buildings in simplified Renaissance style facades.

While walking around we used Nolli‘s 1748 figure ground map laid over what exists today to understand the great extent to which some places have been altered. Above the map diagram shows the Corso Vittorio Emmanuelle II artery cutting through the center of Rome (horizontal red line) as well as Via Arenula (north-south) which turns into Via di Trastevere south of the river crossing. It of course terminates at Vittorio, but there was a plan to extend it even further north and split along either side of the Pantheon (located just a few blocks north, off the map). In that proposal, the Pantheon was deemed important enough to preserve, but of course dozens of buildings around it did not have that esteem. Thankfully this extension did not occur.

Additionally on our walking tour, we visited the Palazzo D’Esposizione museum, located on Via Nazione, completed in 1882, so the new state could show its interest in art and culture. There was a new, essentially all glass addition on the back containing a cafe and restaurant. We stopped here first before visiting the gallery, which was seemingly entirely separated (we actually had to go outside and reenter the front of the building). Currently there is a large exhibit with the works of Alexander Calder, who is best known for his mobiles and large (often red) stainless steel sculptures. A group of school children tried to make one of the large mobiles move by blowing at it from afar. How fun.