New weekly update on news and development in the City of Five Seasons. It’s time to enjoy.

For years Cedar Rapids purchased only used and refurbished buses, which had more mechanical issues and were less attractive to riders. Having modern, new buses is critical to improving the system, but CR Transit still has a long path to becoming a better transit system fit for Cedar Rapids’ size.

CR Transit will have one of the new buses on display during the Kernels game this Saturday, July 17, from 3:30 – 5:30pm at Veterans Memorial Stadium in celebration of the 20th Anniversary of the American with Disabilities Act. Fans can check out the new bus and is an opportunity for people who have never ridden the bus to see how easy and convenient it can be.

Medical District News
In a finely-worded press release this week, two public meetings were announced for August regarding PCI’s Medical Mall development. Earlier this year PCI proposed closing 2nd Avenue SE between 10th and 12th streets, claiming it was the only configuration they could fit all their programs without disrupting ground level connectivity (despite two adjacent blocks that are proposed to be surface parking in their plan). Initially most members of the City Council seemed cool with this, giving PCI a favorable impression to their proposal, but heavy public opposition soon followed. Most vocal citizens are concerned with the traffic effects of closing off 2nd Avenue and the cost required to convert 3rd Avenue into two ways. I am opposed to the street closure, not for vehicular traffic, but the barrier it will create between downtown and the surrounding residential neighborhood and disruption to the urban pattern. (I will argue this position more precisely in a later post.) The meetings will be held at the Crowne Plaza Ballroom on Wednesday, August 4, from 4 – 7pm, and Thursday, August 5, from 11am – 1pm.

Also, the City Council is likely to approve spending $124,336, for Alliant Energy to burry power lines along 7th Street E from A Ave NE to 8th Ave SE, in anticipation of future streetscaping along the street related to Medical District improvements. From Rick Smith’s City Room blog: “According to a city staff report to the council, Interstate Power and Light Co. needs to install a new transmission line along Seventh Street SE, and putting it underground would cost the city less now than to do it later. The city has agreed it would pay the extra cost to move lines underground, the staff report notes.” These improvements will help improve the aesthetic of the new Medical District and the area around downtown.

Events Center Development
A design team of OPN Architects, Ellerbe Becket and tvsdesign has been selected for the new Cedar Rapids Events Center, which will include a renovation and expansion of the existing US Cellular Center and a large addition housing new meeting and exhibit space. 3rd Street NE will be closed between 1st and A avenues and then new addition will occupy that space and half of the adjacent block, wrapping around behind the Roosevelt Hotel. Most likely the Roosevelt parking garage facing 1st Avenue will remain as well. This is a truly exciting project for downtown Cedar Rapids and will provide much needed upgrades to our convention facilities to attract more events and people downtown. The project timeline set out by the city is quite swift with construction to begin late next summer and be complete by the end of 2012. Keep up on the Events Center progress on the City’s CR Progress webpage.

Juvenile Justice Center Groundbreaking
A ceremonial groundbreaking took place this morning in the 800 block of 2nd Street SW for the new Linn County Juvenile Justice Center, which will house juvenile courts and related services that were formerly in the basement of the county courthouse on Mays Island. The building design was by Design Dynamics Inc. of Cedar Rapids; rendering below. 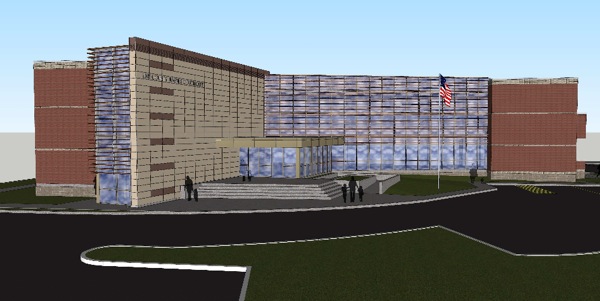