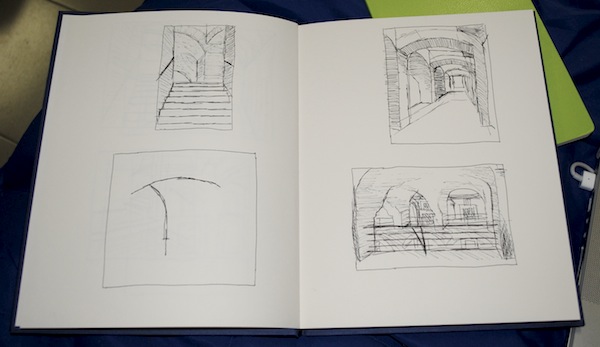 The past couple of days have been pretty rainy in Rome, making plans to sketch outside for class difficult. Monday we walked in the rain to the Pantheon, about a 5-10 minute walk from studio to sketch for about half hour before the profs decided to return. Today my studio went to Trajan’s Market to draw (inside) quick “story board sketches” with a series of vignettes showing movement through the space. I rather enjoyed this exercise, but would be more valuable outside to illustrate movement through a particular urban space. Tomorrow we meet at Termini Station in the afternoon to draw people in motion.

This afternoon we had the last of three lectures from historian Jan Gadeyne about the development and redevelopment of Rome. It is interesting to realize that Rome today is not what it has always been – most places have been built over older structures or modified from them. Only recently (past century or so) has preservation become so strict, arguably turning the city in to a museum. My friend Jamin is working on a guest post that will go into more detail. In the meantime, check out Jan’s appearance on the History Channel documentary ROME Engineering an Empire.